President Rock is a becoming a real thing that could very seriously happen. Last year, Dwayne Johnson teased that a career in politics could be in his future. Specifically, he flirted with the idea of a potential run for the White House in the future. Now he’s done flirting with the idea, as he says he will “100% consider” running for office in 2024. Here’s what he had to say about it in a recent interview. 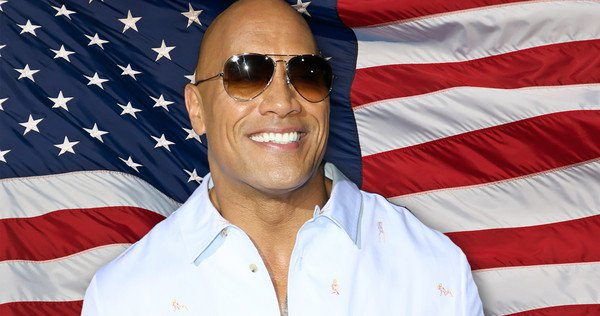 Dwayne Johnson is currently promoting his upcoming movie Jumanji: Welcome to the Jungle. One of the many major projects he has lined up over the next few years. For that reason, it’s not realistic to assume that he could run for office in 2020. But 2024? That’s a different story. As The Rock tells it, this all started “out of the blue,” but given the response to the idea, he’s had to really consider it.

“It all started out of the blue…It was never something that I trumpeted and beat my chest and ever said publicly, ‘This is what I’m going to do,’ but as that story picked up, Americans picked it up and there was this sentiment of, ‘We’re not joking, and we would really love the idea if you would run.’ In that, I knew I had to listen to the people and really, really think about it. That’s where I’m at right now, I’m well aware politics is not the business I’m in, so the best thing I can do is continuing to listen and learn as much as I can. I’m continuing to watch our presidency and watch how every new development is handled. I continue to watch our leaders in government, and like all Americans, I continue to be hopeful that our leaders exhibit poise, perspective and the ability to bring our country together during these tough times, which I don’t feel our presidency is currently doing, so that’s where I’m at.”

Dwayne Johnson added, “I care deeply about our country, and I care deeply about our people, especially now. Decency matters and being a decent human being matters, and character matters, and leadership matters.” This may sound a little crazy, but is it really that crazy? Donald Trump, a former reality TV star, is now president. Why not one of the biggest movie stars on the planet? After all, Ronald Reagan started out as an actor and Arnold Schwarzenegger had a rather successful run as governor of California. Johnson even seems to have ideas on how he’d like to handle things already, should he actually make a bid for the highest office in the land.

“I think this is just a product of my DNA, in that when there’s an issue, that’s the time we have to come together, work hard to understand each other and ultimately get to a better place. For example, when it’s a polarizing issue like our NFL players kneeling during the National Anthem, that’s not a time to be divisive and shut them out of the White House. It’s the time to actually open the doors and bring those players in so our President and staff can understand exactly what the needs are, face to face, so change and positive progress can happen, but that’s not happening right now.”

From a practical standpoint, this could work out. If Trump loses in 2020, that means there will be a Democrat in office. Though he’s registered as an Independent currently, odds are, Dwayne Johnson would run as a Republican, as he’s indicated in the past. So, he could aim to be the Republican nominee in 2024.

Earlier this year, Dwayne Johnson joked about a possible run for President, with Tom Hanks as his running mate on an episode of SNL. That obviously wouldn’t be who he’d actually run with, should this come to pass, but in this new interview with Variety, The Rock says, “Two necessities off the top of my mind are that I’d want my VP to be a tremendous leader and a high-quality human being. Whether that’s from Hollywood, Washington, the medical field, Wall Street or education.” It’s a long time from now, but don’t be shocked if Dwayne Johnson becomes a serious contender for President in several years.