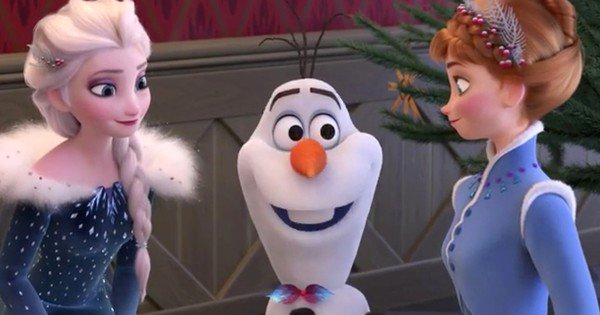 In Olaf’s Frozen Adventure, Olaf (voice of Josh Gad) teams up with Sven on a merry mission. It’s the first holiday season since the gates reopened and Anna (voice of Kristen Bell) and Elsa (voice of Idina Menzel) host a celebration for all of Arendelle. When the townspeople unexpectedly leave early to enjoy their individual holiday customs, the sisters realize they have no family traditions of their own. So, Olaf sets out to comb the kingdom to bring home the best traditions and save Anna and Elsa’s “first Christmas in forever.”

This Frozen short actually caused a bit of controversy, with fans who showed up to see the Dia De Los Muertos musical Coco surprised to see a 21-minute Frozen short, which some thought was originally supposed to be a TV special, which is actually correct. There had been plans to air this as a stand-alone holiday special before the decision was made to place it in front of Coco, which seems to have been ill-advised. We reported last week that Disney sent notice to theaters to stop playing Olaf’s Frozen Adventure in front of Coco, starting today, December 8, which seems to coincide nicely with today’s announcement of the short debuting on ABC next week. Here’ what Academy Award-winning producer Roy Conli (Big Hero 6) had to say in a statement.

“We are thrilled to be part of ABC’s 25 Days of Christmas festivities. While making the film, our crew was so inspired by all of the great television holiday specials of the past. It’s a dream come true for all of us.”