Movies that are based on real stories are the most spectacular ones. The effect increases if we speak about horror movies.

Acquainted 13 scary stories that are not just a film director’s bright imagination.

The plot: An anthropologist from Harvard University goes to Haiti to get some mysterious powder that suppresses the psyche and human motor function.

The real story: The movie is based on Davis Wade’s book The Serpent and the Rainbow. Davis personally faced a terrifying science that dates back centuries. In his book, he writes about his incredible experience of the zombification process.

The plot: Columnist John Klein and his wife are going to buy a house. They get involved in a car accident after they visit one of the houses. Mary claims that she saw a strange creature.

The real story: The movie is based on John Keel’s book. John studied witnesses’ stories about the Mothman and conducted his own research. The last time the Mothman was seen was before the Silver Bridge collapse, which resulted in the deaths of 46 people.

The plot: Aileen Wuornos, a prostitute, is beaten and raped during her meeting with a client. She kills him with a revolver that is hidden in her bag. After this accident, Aileen starts to kill all clients that she thinks deserve to die. She follows her own rules and doesn’t kill people who seem to be good.

The real story: This movie is the real story of Aileen. Wuornos was convicted and sentenced to 6 death penalties. She was executed on October 9, 2002.

The plot: The happy and respectable Bells are cursed. They are being visited by a ghost that wants one of the family member’s death.

The real story: There are 35 books about the family that was attacked by a mysterious spirit. Something paranormal had been tormenting the Bells and making their life unbearable for several years. It killed one of the family members. John Bell’s death is the only one in American history that is documented as a death caused by a ghost.

The plot: A newly married couple with 3 kids moves into a new house. The cost of the house is really low because the previous owners died a horrible death, but the new family doesn’t know this fact. Strange events happening in the house convince the new owners that something terrible hides inside.

The real story: On November 13, 1974, Ronald DeFeo killed his father, mother, 2 sisters, and 2 brothers. It’s his story that is at the heart of the movie. Though there were lots of mysterious details, DeFeo was sentenced to 6 sentences of 25 years to life (150 years in total).

The plot: The parents of 2 girls (Silvia and Jenny) decide to leave in search of money. The kids are left in the care of Gertrude Baniszewski for $20 a week. But a payment is delayed for 2 weeks, and Gertrude decides to punish Silvia and Jenny.

The real story: The murder of Sylvia Likens is the most horrible crime that has ever happened in Indiana. It’s hard to imagine that real people can act like this: Gertrude’s kids beat and tortured Silvia. The most disgusting thing was that neighbors knew about everything and didn’t even try to help or rescue the girls.

The plot: This serial killer has more victims in its collection than Jack the Ripper and the Unabomber combined. People tried to kill it many times, but they failed their mission or were killed.

The real story: The movie is based on the real story of the 6-meter-long crocodile, Gustave. It’s believed that it’s 65 years old and has eaten more than 300 people. Many local and foreign hunters, with the help of military forces, tried to kill it using AK-47s and explosives, but it’s still alive.

The plot: After the disappearance of Walter Collins (Christine’s son), the police find a boy, but the woman understands that it’s not her son. Christine falls into despair and asks journalists to help her. But the city government isn’t interested, so the woman is claimed to be an insane mother.

The real story: The Wineville chicken coop murders are a series of kidnappings and murders of boys in Los Angeles. Quicklime was used to dispose of the bodies, and the remains were buried on a ranch’s territory. Some bodies were identified: presumably, one of them was the body of Walter Collins. Now you know about all the horrors of this movie.

The plot: During a radio talk show, a scared man tells about the shadow people who come and kill people at night.

The real story: The movie is based on the phenomenon of the shadow people. Scientifically it can be explained as an optical illusion. Scientists have conducted research: during the electrical brain stimulation of a patient who suffered from epilepsy, the patient noticed that someone was repeating her moves behind her. And when doctors asked her to read something on a card, she said that a ghost was trying to snatch the card from her hands.

The plot: The Perrons move into a new house and discover that they are not alone there: someone slams the doors, the couple feels cold, there’s a smell of rot, and kids see strange reflections in the mirrors. They turn to the Warrens, an exorcist couple, for help.

The real story: In 1970, a woman bought her daughter a doll. The girl took it to college with her. Later, the girl’s neighbor realized that the toy was living its own life. Ed and Lorraine Warren, who investigated this case, concluded that there was an evil spirit inside of the doll called Annabelle.

The plot: The NYPD investigates a series of unexplained crimes. One of the policemen asks an exorcist for help.

The real story: The movie is based on Sergeant Ralph Sarchie’s stories. He worked in the 46th precinct of the Bronx. He has also published a book called Beware the Night. Ralph described his experience in investigating some cases (including mysterious ones).

The plot: Paul and Jenny are about to fire their old housekeeper, Agatha, who becomes more and more forgetful and malicious. The angered woman gives a doll called Robert to her former employers’ son. Later, after she leaves, strange things start to happen in the house.

The real story: This doll inspired lots of film directors. And it was really gifted in retaliation for a bad attitude to a housemaid. Witnesses claimed they saw scary and horrible things: the doll winked and moved from one room to another at tremendous speed. 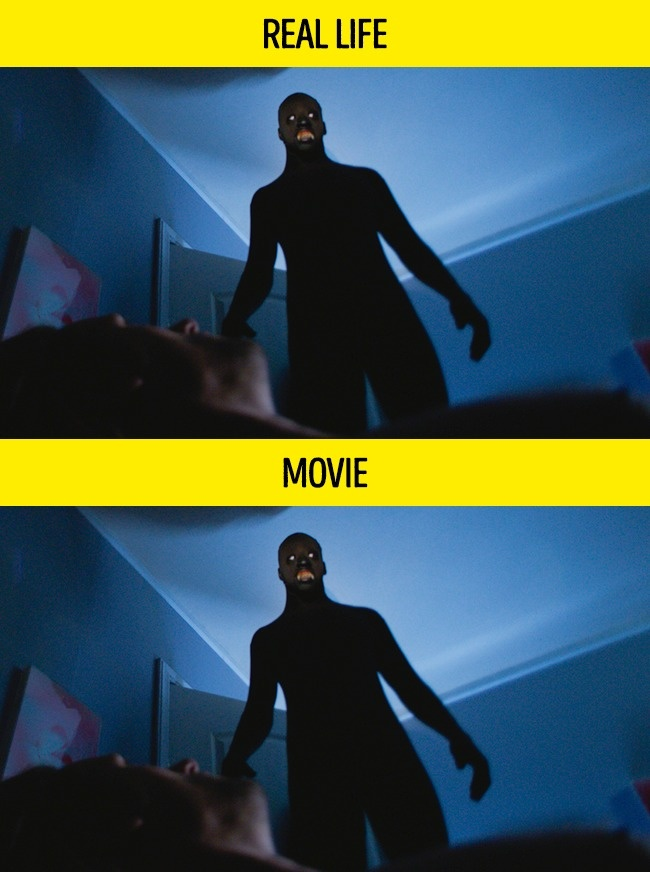 The plot: The film director interviewed each project participant and recreated everything they saw in their dreams. This documentary shows 8 different people who see similar dreams where a strange man’s shadow appears.

The real story: The movie studies the sleep paralysis phenomenon. With the help of 8 people, the viewer can see what happens when someone is almost awake but their consciousness is still shackled: they understand everything that is going on, but they are unable to control their body.

It’s inconvenient when someone stands behind you. Especially if it’s not a human being but a creepy ghost. This girl wanted to swap faces with a bear, but the program recognized an absolutely different face.